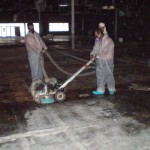 If you have vermiculite insulation in your home, you should assume this material may be contaminated with asbestos and be aware of steps you can take to protect yourself and your family from exposure to asbestos. This Web page –